I’m going to cheat a bit with my posting as it was my turn to pen the Saturday Spotlight on The Write Romantics blog yesterday so I’m using the same post with apologies to anyone who follows both sites!

Daphne Du Maurier’s Jamaica Inn. Never has a BBC adaptation caused so much controversy. Complaints of mumbling, bad accents, incoherent speech etc. were rife. The BBC claimed “technical sound difficulties” on night one. Can’t say I noticed any difference by night two. I found myself faced with two choices – give up or put the subtitles on. I settled for the subtitles. I usually put Film4 on while drying my daughter’s with subtitles on because I can’t hear over the noise of the hairdryer. Having them on without the hairdryer was definitely a first.

But the purpose of my post today is not to discuss poor sound quality. I want to be extremely British and talk about the weather. I promise you that there’s a point to the Jamaica Inn reference. You see, the other thing that slapped me across the chops whilst watching the three episodes was the weather. Darkness enveloped the bleak moors, wet mud caked the bottoms of dresses (except in the continuity error when Mary Yellan ran across the moors at one point and her dress was miraculously clean but let’s not go there), dark clouds flew across grey skies and rain lashed down. Then, at the very end, we saw our first glimpse of blue sky and fluffy clouds.

I haven’t read Jamaica Inn (sorry, such a pleb) but I wonder if the weather in the dramatization matches the book. As it’s described as a “dark, gothic novel”, I’m imagining it does. The dark skies, fog, rain and mud all helped absorb the viewer in the remoteness, desolation and desperation of the cast stuck in a bleak place where smuggling and murder had become a way of life.

The use of weather in writing is a subject that’s particularly close to me at the moment as it was one of the things that was flagged up in my disappointing NWS report for book 2, Getting Over Gary.

I’m very conscious that my natural style of writing is dialogue-heavy/description-light so I specifically spent time during an edit of book 1 making sure I covered all five senses, described my settings, and captured the weather. I thought I’d done this well and my reader of book 1 clearly agreed: “you describe things in just the right amount of detail, so that there’s enough to give an idea of the place, but not so much that it’s noticeable. I was very impressed. The setting is easy to picture (and quite stunning in location)”.

So how come book 2 got: “The North Yorkshire coast is beautiful, potentially forbidding and romantic all at the same time. A really excellent place to set this sort of story. So why not make more of it?” Oops! As soon as I read that, I smiled wryly to myself as I’d completely forgot to do my special edit to add in the stuff I know I leave out. Thankfully, it’s not tricky to do this and I know I did it well in book 1 so I can apply that same approach to book 2.

The use of weather in books is fascinating. There’s the obvious idea that it helps us capture the seasons and therefore move the book through the passage of time but it’s even more powerful in that it can really help set moods and emotions. In book 1, I have quite a traumatic opening scene for my protagonist and the emotion is heightened in this scene through a thunderstorm. Throughout the book, heavy rain or storms make an appearance at various other points of turmoil to the point that the protagonist actually fears storms because they create such a sense of foreboding for her. In book 2, the protagonist’s “challenges” are in the height of summer; not so many thunderstorms around. And I didn’t want to repeat myself with the same storm technique to create mood so, instead, the fun and laughter enjoyed by families during the summertime at the seaside act as a stark contrast to her sorrow.

As well as heightening emotion, weather can be the catalyst for something to happen. I’ve mentioned before on this blog that one of my favourite romcoms is 27 Dresses. In a key scene in this film, the two leads have a heated argument whilst she’s driving. Rain pelts the car (good mood-building weather) and then the car aquaplanes, leaves the road and gets stuck in the mud. This means the leads have no choice but to spend the night together and this is the catalyst for their relationship developing. The argument wouldn’t have been nearly so dramatic if there’d been sunshine and the accident wouldn’t have happened.

Another way of using weather is to trigger something e.g. flood-waters carry a dead body downstream which would have remained hidden otherwise or a ship is wrecked at sea in a storm and the survivors are washed up on a strange island. My imagination was particularly captured recently when I read an article in the Huffington Post. Two 17-year old girls went missing in 1971 in South Dakota. What happened to them had remained an absolute mystery until last autumn when high spring waters followed by a drought revealed the wheels of a car upside down at the bottom of a creek. It was the car they’d last been seen in and skeletons were found in the front seats. It would appear to have been a tragic accident rather than foul-play. Those poor girls in their watery grave and their poor parents not knowing if they were alive or dead for 42 years. I don’t write about murders or mysteries but still story massively triggered my “what if …” reaction. What if they’d never been found? What if they’d been found with bullet holes in them? What if the car had been found but the bodies inside weren’t theirs? What if one of them had been pregnant? What if other cars were found in the same creek? What if something sinister was found in the boot (sorry, trunk; this was in the USA)? And suddenly I had a load of plots for a different genre forming in my head which is not good because I already have book 3 in my trilogy and the outline of another 3-4 books of the same genre already in my head. Too many characters. Too much to think about. I feel a storm brewing in my head! And that brings us nicely back to the weather.

I thought I’d finish this blog post with some more of my husband’s fabulous photographs (all the earlier ones are his) which are potentially really evocative of mood. This first one is a picture I absolutely adore. It was taken at the Armed Forces Day in Scarborough in summer 2013. My 6-year-old (at the time) was dressed in patriotic colours and we’d taken a break from the crowds. She wandered away to look at the fairground and hubby captured this shot: 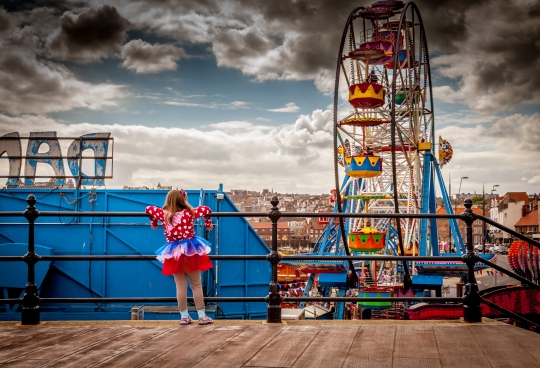 If you were to write a story about this image, what would it be? When would it be set? Would the mood be one of a happy childhood or is there something a little spooky or sinister about this? It generated a lot of debate when hubby first posted it on Facebook. Whilst everyone loved it, the jury was out as to whether there were dark undertones. I personally think it’s just very atmospheric and don’t feel the need to label it happy or dark.

What about this one? Clearly it’s a very different time of year. This was taken round the corner from where we live in the winter of 2012/13. Excitement and anticipation of first-footing in the snow or something a little more eerie? I have this image of a dark shadow appearing under the lamppost … 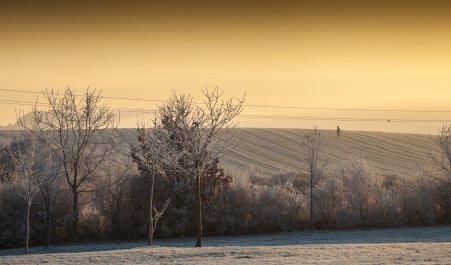 Here’s another completely different one. Same time of year but a very different feel. Is it a calm feeling or is it one of loneliness? Who is that man in the middle of the field and what’s he doing there? He was actually a dog-walker and you can see the dog in another shot but, without the dog, why is there a man stood in the middle of a field early one morning. Who’s he watching?

Finally, I’ll leave you with three contrasting photos of the incredible power and beauty of the sea on the North Yorkshire Coast. You can create your own stories from these… 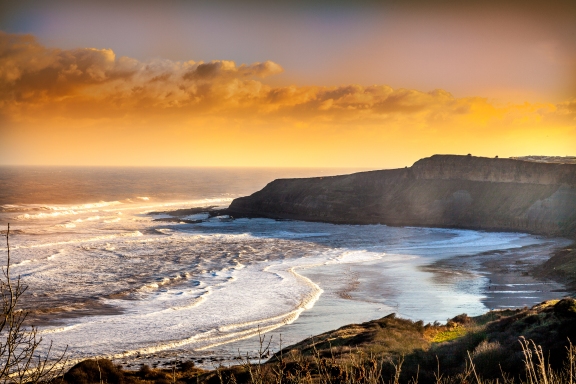 Thanks for reading. Thanks for looking. And thanks to the very talented Mark Heslington for allowing me to use his photos. Right, I’m off to inject more weather and scenery into book 2. Feeling pretty inspired after looking at these. I can bring that beauty to life. Or at least I hope I can! I’d love to hear your stories of great books or films where you think the weather has been used to good effect.

2 thoughts on “Let’s Be British & Talk About the Weather!”

Author of uplifting stories of love and friendship set on the stunning North Yorkshire Coast. Lover of 80s music, chocolate, cake and teddy bears, not necessarily all at the same time

Author of uplifting stories of love and friendship set on the stunning North Yorkshire Coast. Lover of 80s music, chocolate, cake and teddy bears, not necessarily all at the same time

Back to top
From Under the Duvet

Books, cards and a Wobbly Life

After The Rain
Samantha Henthorn finds the right words

Author of Picalilly, 1962, Quirky Tales to Make Your Day and The Curmudgeon Avenue series. #Uplit

General ramblings of a busy person

Books, travel, and other things that make life interesting

Books, reads, writings, reviews, nonsense, silliness, and everything in between.

Books in my Handbag Blog

"I love your book blog and am honoured to be there amongst such class" - Carol Drinkwater, Apr 2017

Welcome to one reader's homage to Cozy Mysteries.

Finding a way to live each day with joy

Contemporary romance from around the world

A Home for Great Writing

From Under the Duvet

Books, cards and a Wobbly Life

After The Rain
Samantha Henthorn finds the right words

Author of Picalilly, 1962, Quirky Tales to Make Your Day and The Curmudgeon Avenue series. #Uplit

General ramblings of a busy person

Books, travel, and other things that make life interesting

Books, reads, writings, reviews, nonsense, silliness, and everything in between.

Books in my Handbag Blog

"I love your book blog and am honoured to be there amongst such class" - Carol Drinkwater, Apr 2017

Welcome to one reader's homage to Cozy Mysteries.

Finding a way to live each day with joy

Contemporary romance from around the world

A Home for Great Writing